Hi all, its Neil here with a look at my first month's progress on our 9th edition group project.  Month 1 had the aim to get a 50 power list built and at least one unit painted from this.  I'll show you below how I've done and what the plan for month 2 is for Hive Fleet Lindworm.
Read more »
By Neil H No comments:

Lockdown measures are slowly easing across the country, and the world is beginning to reopen. Despite the steps begin taken to return to normal (or whatever the new 'normal' will be) I suspect it'll be some time before Games Workshop stores are able to host games, and gaming clubs across the country reopen their doors.
With house-to-house interactions now allowed and social bubbles opening up to allow visitors it's looking like gaming from home may become viable within a few weeks. In preparation for that occasion I've spent some time painting up the Corpsewrack Mausoleum, one of the Warcry Environment boxes (and yes... it's from my backlog!)
Let's dive in and check it out.
Read more »
By DrMedge No comments:

Hello again, I'm Neil and it's time for 15 mm tanks in WW3 again.  In an earlier post I'd painted some Chieftain tanks for my Team Yankee force and now I've come back to Chieftains to bolster my minimal formation with another 3 for now (I ran out of Deathworld Forest Air paint for the last two I currently have so they'll be coming soon-ish).
The Chieftain is still the main tank of the British Army in Germany even though its an older tank at the time of setting of the game but with its powerful gun and thick armor it is still able to deal with even the best that the Pact can field.  The Chieftain can be further upgraded with the stillbrew armor package further increasing its armor on the front but reducing its ability to successfully navigate rough terrain.
Here are my three newly completed Chieftain tanks;

Hi all, its Neil here and welcome back to my WW3 Team Yankee series.  Today I though that I'd share a bit about the game itself for those who are unfamiliar with it as it is not so widely known, particularly compared to something like 40k.  The WW3 Team Yankee game is created by Battlefront who do both the rulebooks and miniatures for it.  To give a bit of context to other WW3 posts here are some  basics for both the background and playing the game from a newer player of the game. 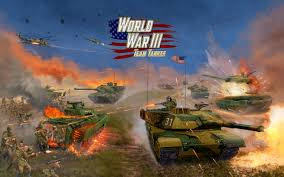 Breaking the Iron Curtain - A WW3 Project by Medge

On August 4th 1985 the unthinkable happened; the Soviet Union crossed the Iron Curtain and invaded West Germany.
Soviet Tanks rumbled though West Germany, making significant gains in territory in the north and south of the country.
NATO had long suspected a Soviet strike and, whilst the their forces were not fully prepared to meet the Soviet advance, their defences held in key locations throughout Germany.
The Soviets had struck hard and fast; now it was NATO's turn to counter-strike. War had been declared, and the Iron Curtain would fall once and for all...
Now clearly this is not the History we know. It forms part of the opening narrative for World War III: Team Yankee; a 15mm combined-arms war-game made by Battlefront Games.
My fellow warlord, Neil, is a big fan of Battlefront games and has been pitching Team Yankee for a little while now (as regular readers will know from his WW3 series). Earlier this year (pre-lockdown!) I had brief demo of the game and really enjoyed it; it was a deep and detailed games system that played in a fun and fluid manner.
Off the back of this I was gifted a starter set, and I've used lockdown as a bit of an excuse to crack it out and take my first steps into a darker alternate history; one where the Cold War got very hot!

Hi all, its Neil here and welcome back to my WW3 Team Yankee series.  It's been quite a while since my last post for WW3; so long in fact that there has been a whole new edition of WW3 Team Yankee.  Last time I showed the 5 chieftain tanks that I'd painted which gave me the bare minimum for a chieftain company in game.  This time I've painted up some air support for these tanks in the form of a pair of Lynx TOW helicopters. These hunter killer helos mount two TOW guided missile launchers on their flanks and are great at taking out even the heaviest Soviet Soviet armour.
For the colours I've used this image from the internet as my inspiration.

Xenos on Crusade: Introductions and Kick Off

What a great time for hobby, eh?

Games Workshop's announcement of 9th Edition 40k has come as a very welcome burst of excitement in these difficult times, and reignited the passion and interest in 40k for all our Warlords.

There's so much great stuff coming out on Warhammer Community right now for the new Edition it really is shaping up to be the best edition of Warhammer 40k to date!

One of the new ways of playing that has really piqued our interest is the Crusade system. For those not following the community page, Crusade is a new narrative way of playing that will see your force evolve over consecutive battles. Not only does your force increase in strength from game to game (via points/power rewards that allow you to bring more to the table), your individual units are able to earn honours (bonus rules/stats) and battle scars (negative rules/stats) for the acts they commit on the tabletop.

This RPG-style evolution of a force doesn't only sound like a great way of playing normally... but the perfect set-up for another Tale of Five Gamers!

Blood of the Angel, Part 2; A Bash the Backlog Project, by Medge

Welcome back to my Blood of the Angel series - a #BashtheBacklog project chronicling my progress towards having a competitive Blood Angels army, and a slightly tidier hobby space!
In part one I talked more about what what drew me to the Blood Angels, my goals/ aspirations for the project, what I'd been working on and what I still had outstanding.
Since then I've been jumping between projects, trying to alternate between Blood Angels and non-Space Marine projects to keep things fresh.
How have I been getting on? Well let's get into it!
Read more »
By DrMedge No comments:

The May Update - James' Hobby Progress

And just like that May's over and done with. I've been finding the days have been flying by staying at home. Once again however it has meant lots and lots of time for hobby. In my last post I detailed what I'd managed to paint in April, working through a few backlog goals I'd set myself at the beginning of lock down to try and keep myself productive. Now that May is in the bag I wanted to do the same again. So what have I finished? 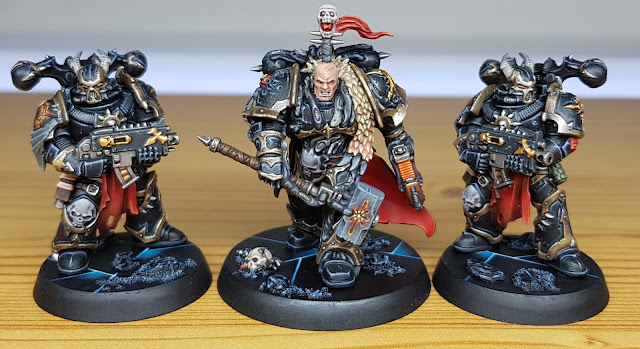 Warbands of the Bloodwind Spoil: The Iron Golems, by Medge

From the moment it was first announced Warcry had me hooked in. For years I've been I've been saying the Mortal Realms needs more mortals! Age of Sigmar is a great game, but it's often played as battles between Demi-gods and daemons, immortals and monster. The mortals of the mortal realms are left cowering in the novels, taking no active part in the game itself.
So the launch of Warcry, and the representation of the morals of the realms on the tabletop, was a great thing.

After a few tentative games in the Bloodwind Spoil with existing factions I own (thanks to the Warcry expansions for AoS armies) I've bitten the bullet and painted my own Warcry Warband; the Iron Golems!
Read more »
By DrMedge No comments: 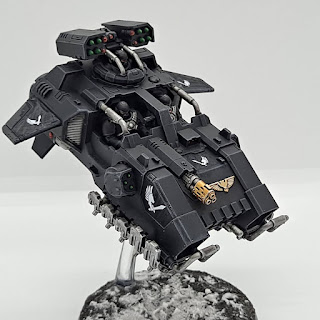